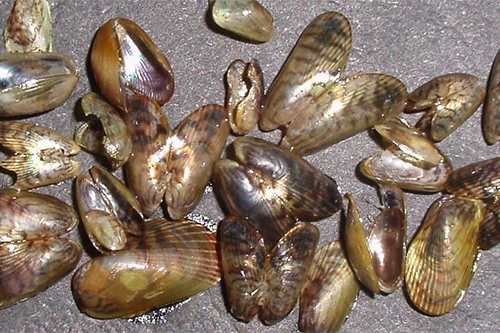 The Asian bag mussel is considered a pest in the Northern Territory (NT). It multiplies quickly and grows into extremely dense mats of up to 15,000 mussels per square metre on the sea floor.

It grows fast, has a short lifespan and spreads easily. It can smother native marine life and remove oxygen from the underlying seabed.

The Asian bag mussel is not currently found in the NT and if you find any you must report it. Read how to report aquatic pests.

A small mussel that reaches a maximum length of around 30mm.

It is olive-green to brown, with darker radial lines or zig-zag markings.

It is thin with a smooth surface.

It can be found from the intertidal zone to depths up to 20m in a wide range of temperatures.

It grows densely on soft sand and mud and on hard surfaces like vessel hulls and wharf pylons.

It prefers to settle in groups on sand or mud where it burrows vertically, leaving only its end protruding.

It is native to the north western Pacific - from Siberia and the Kuril Islands through to Korea, Japan, China and Singapore.

It is thought there are two strains of the species - one tropical and one temperate.

It was first recorded in Australia in the Swan River, Western Australia, in the early 1980s.

It became established in Victoria in the late 1980s and is now found in Port Phillip Bay, Western Port Bay and Portland Harbour. In 1995 it was reported in the Tamar River, northern Tasmania.