Everything in this part of the Victoria River District is big, including the barramundi, saltwater crocodiles, the landscape and challenges on the many four-wheel drive (4WD) tracks through the park.

In the west of the park, don't miss the historic Gregory's Tree, a large boab tree with carvings from Augustus Gregory's 1885 north Australian expedition. It's an Aboriginal sacred site and registered heritage site, and has interpretive signs at its base.

You should also visit Bullita Homestead with its historic display.

There are saltwater crocodiles in all waterways in Judbarra / Gregory National Park. Do not swim and Be Crocwise at all times.

If fishing, check the size and bag limits for barramundi.

To read more about what this massive park has to offer get the Judbarra / Gregory National Park fact sheet and map PDF (1.3 MB). 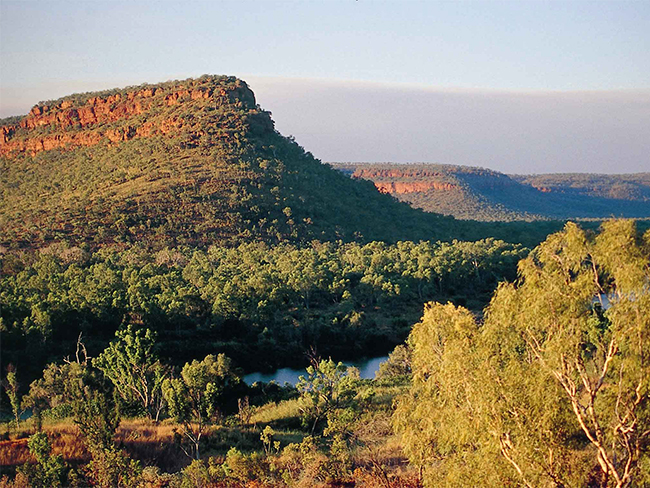 All year round, but roads may not be accessed at times during the Wet Season.

Take the Victoria Highway from Katherine or the unsealed Buntine and Buchanan Highways.

The traditional owners of Judbarra rate this land as an important part of their cultural identity, with huge spiritual significance.

The park is still used by these people for ceremonies and rituals.

Numerous archaeological sites in the park show a long history of Aboriginal occupation.

The rock shelters and caves of Judbarra support a wealth of rock art.

Much of the rock art of this region appears to represent an art style very different from other areas.

Human figure motifs are the most common.

There are a high number of composite engraved and painted figures, making it one of the largest sites in Australia.

You can see and do all of the following in the park:

Judbarra / Gregory National Park has all of the following facilities:

If you plan to launch a boat in the park you should be aware of the following:

You can have a safe and comfortable trip to Judbarra by doing all of the following: