Ormiston Gorge is a great place for a swim, or to see the towering walls of the gorge and pound, local plants and wildlife.

Located 135km west of Alice Springs in the Tjoritja / West MacDonnell National Park, it is accessible by sealed roads and is the trailhead for sections nine and 10 of the Larapinta Trail.

The gorge has a waterhole that is there year round and is great for swimming, especially in warmer months.

It is located just 500m from the visitor centre and is estimated to be up to 14m deep at its southern end.

The five minute Waterhole Walk, which has wheelchair access to the end of the paved path, and the 20 minute one way Ghost Gum Lookout Walk are the most popular with visitors.

Another way to explore the area is by walking the Ormiston Pound Walk, which is a three to four hour circuit that follows the rocky slope into the flat expanse of the pound and back along the gorge by the main waterhole.

The area has an interesting range of native plants and animals including a number of relict plant species from Central Australia's tropical past.

The park is also an important fauna refuge, with the rediscovery of the Central rock-rat in 1997.

You can camp in the designated campsite, though fees do apply. 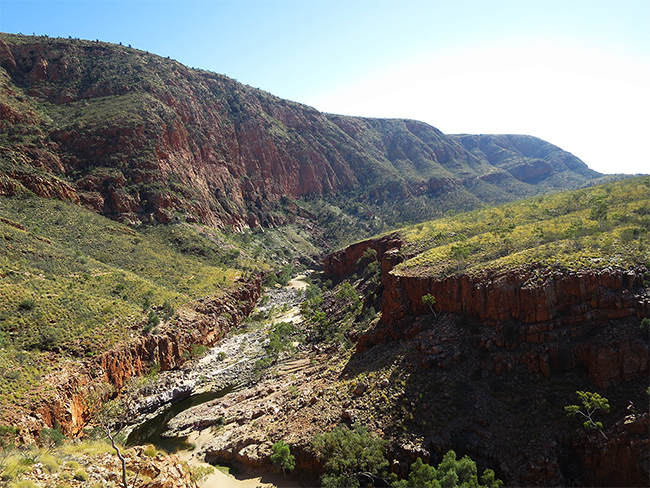 All year round, but roads may close after heavy rain.

It is best to visit in the cooler months, from April to September.

The turn off to Ormiston Gorge is off Namatjira Drive 135km west of Alice Springs.

You can do all of the following activities at Ormiston Gorge:

Ormiston Gorge has all of the following facilities:

When visiting Ormiston Gorge remember all of the following:

You can have a safe and comfortable trip to Ormiston Gorge by doing all of the following:

Most swimming holes are very cold so be careful swimming at any time of year as long exposure, even in summer, can lead to hypothermia.