The Cross Border Justice Scheme is a partnership between Western Australia (WA), the Northern Territory (NT) and South Australia (SA).

It removes the state and territory borders in the outback cross-border region to improve law enforcement and justice in the area.

This means police, judges, fine enforcement agencies, community corrections officers and prisons can deal with offences that may have occurred in another state or territory.

Offenders cannot escape justice by going interstate. This provides a safer environment for residents in the cross-border justice region and gives communities the confidence to report crimes.

Where is the cross-border region

The cross-border region is known as the Ngaanyatjarra Pitjantjatjara Yankunytjatjara (NPY) lands. 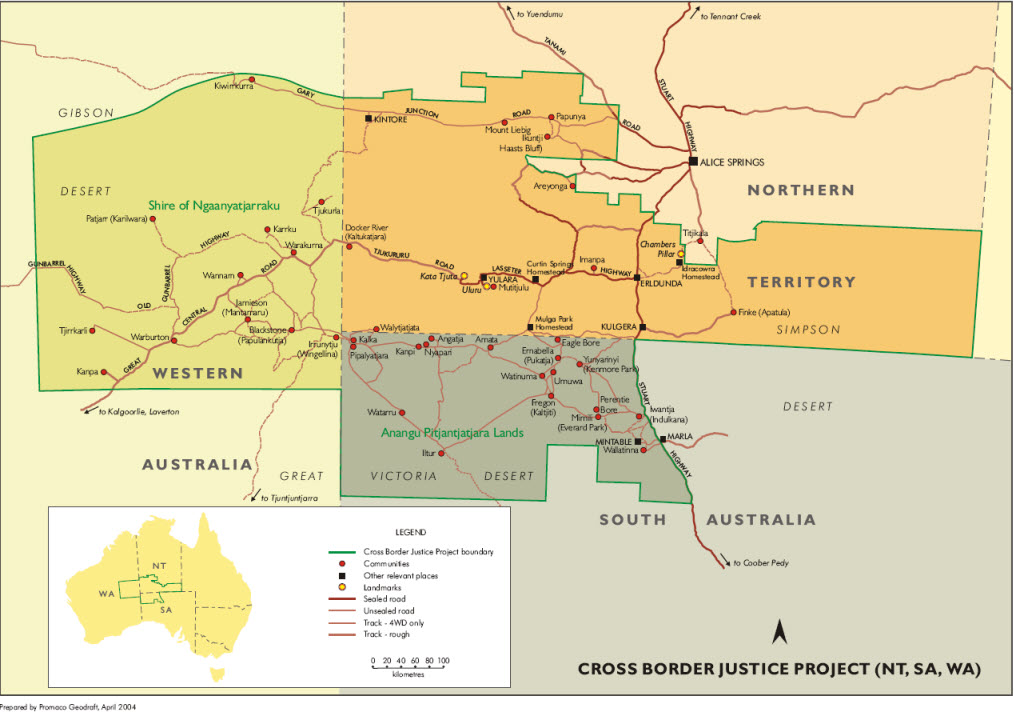 Who does the cross-border scheme apply to?

The law applies to anyone who:

Someone may also have a connection to a cross-border region if they live there or have another matter before the court in a region they are connected with.

When someone is arrested in the cross-border region

When someone is suspected of committing an offence in the cross-border region of SA, WA or NT, police can take them to the nearest police station for a blood-alcohol or drug test. This may mean crossing the border into another state or the NT.

If someone commits a crime in NT, can police chase them into SA or WA?

Police can interview, investigate and arrest you in another state or territory as long as you are connected with the cross-border region.

When someone is remanded in custody in the cross-border region

If you are over 18 and you have been remanded in custody, you are likely to be held in either Port Augusta, Alice Springs or Kalgoorlie.

If you are under 18, factors such as where you normally live and where your family lives will be taken into account when considering where you should be held in custody. It must be a juvenile detention facility.

There are juvenile detention centres in Alice Springs, Adelaide and Perth.

When someone is given bail by the police

If you are given police bail, it should be granted to a court closest to where you live or the community where you spend the most time.

If you already have other charges on your record, you may be bailed to the court where those charges are next listed for hearing.

Your legal rights will be determined by the laws of the state and territory you committed the alleged offence - SA, WA or NT.

For example, if you assault someone in SA, but you are arrested in NT or WA, you will have the same legal rights as anyone in SA.

When someone is released: how to get home

Local police will help you get home or back to your community.

If you are released by a court or a corrections facility (jail) you will be given help to get home or back to your community.

Restraining orders in the cross-border region

The scheme allows a victim to ask that a restraining order apply in SA, WA and NT.

Travel across the border

You may be restricted in where you can travel if the court police makes that a part of your bail conditions or another order.

If you are put under a community supervision order, you must tell your community corrections officer if you want to travel somewhere before you go.

If you are put under a parole board order, you must ask the board for permission to travel before you go.

You can't cross the border if police, the court or the parole board say you are not allowed to.

Moving across the border

If you want to move across the border, you must ask one of the following before you go:

Why the scheme was developed

The scheme started in November 2009. It was developed in response to a call from the women and children of the NPY lands for help to reduce the prevalence of abuse in their communities.

You can ask police officers, correctional officers, court staff and legal aid representatives if you have questions about cross-border justice.

Read, watch or listen about cross-border justice using the below resources: