Scientific name: Jatropha gossypiifolia
Declaration status: Class A weed except in areas where it is classified as Class B

For more information, you can also read the weed management guide PDF (1.5 MB).

Bellyache is a Weed of National Significance. For more information, go to the Weeds Australia website.

Bellyache bush is a native of Central and South America.

It has been introduced as an ornamental and medicinal plant to many tropical countries where it has since become naturalised. Multiple deliberate introductions of bellyache bush into Australia resulted in naturalisation by the 1920s.

Bellyache bush is widespread across northern Australia, especially along watercourses.

It has been recorded in at least 30 localities across the Northern Territory (NT).

These sites range from extensive well established infestations in the Daly river catchment, through to isolated sites in the Darwin, Katherine and Gulf regions.

Bellyache bush rapidly forms dense monocultures in areas where native vegetation is degraded. It thrives in riparian zones and can also spread into intact savanna woodland and grassland habitats.

Bellyache bush can have all of the following impacts: 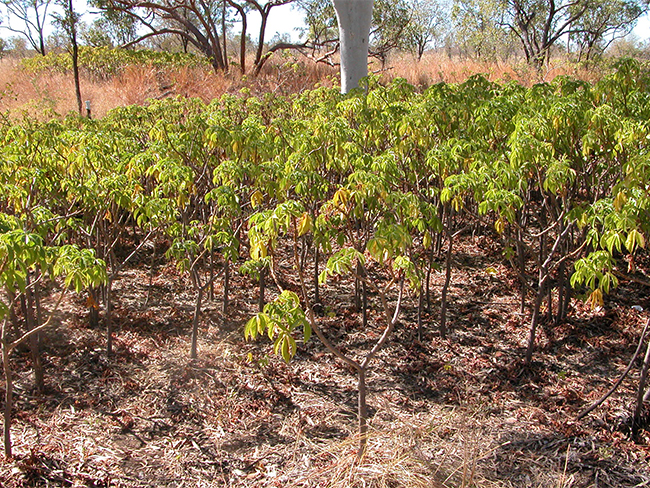 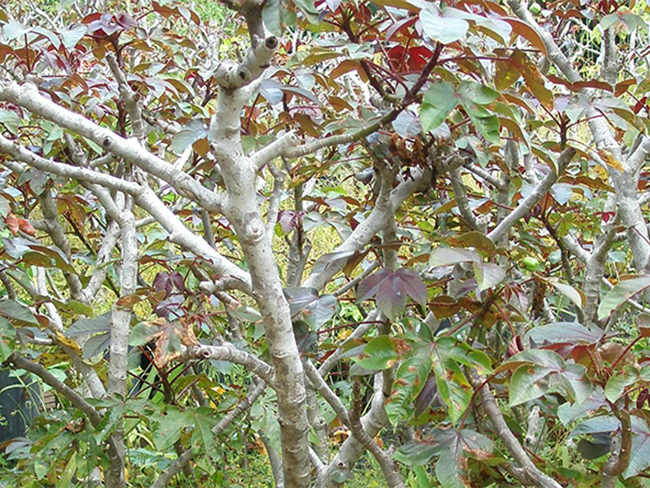 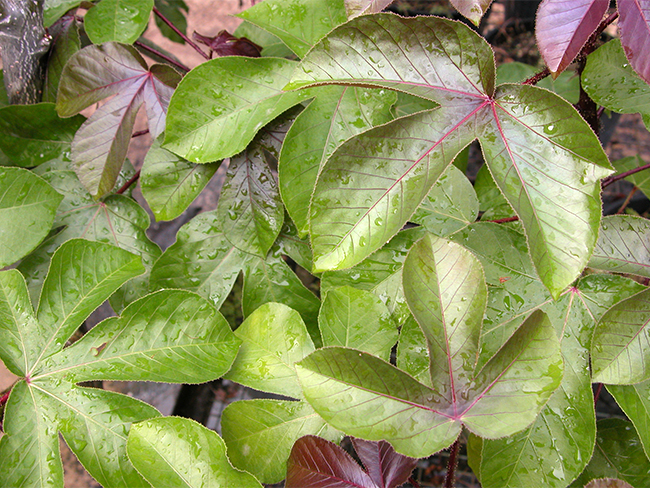 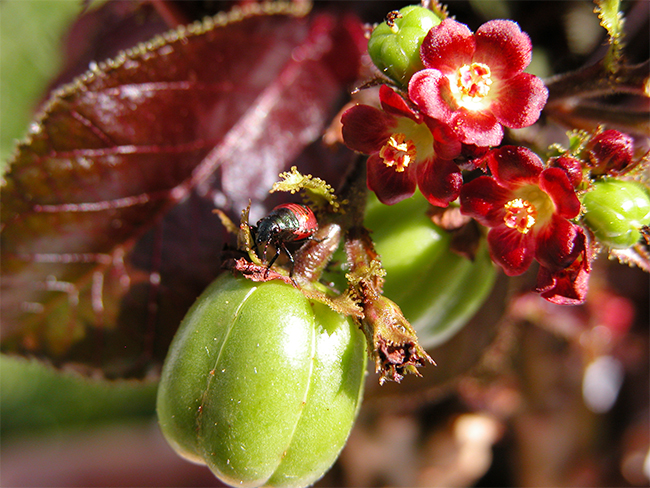 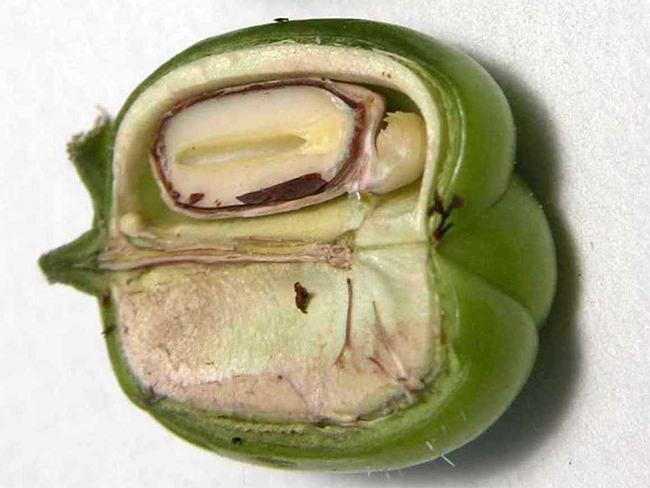 To find out more, get the bellyache bush weed note on the Department of Environment, Parks and Water Security website.

If you're unsure, contact the Weed Management Branch (WMB).

The below plant species look similar to bellyache bush. 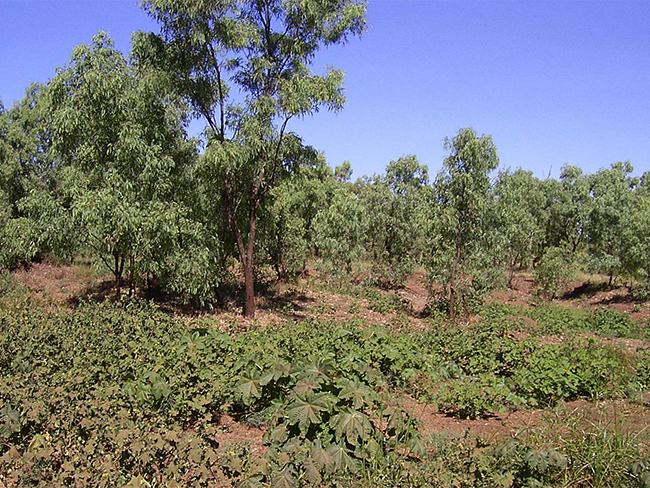 Castor oil plant (Ricinus communis) has leaves with 7 to 9 lobes and flowers in spikes. 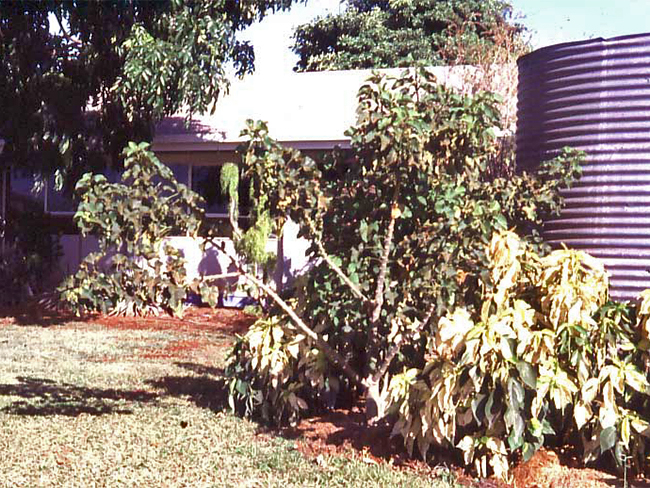 Physic Nut (Jatropha curcas) also naturalised in northern Australia, has leaf margins and leaf stalks without gland-tipped hairs and petals that are yellow to green.

Find out more about physic nut.

To find out about controlling and managing bellyache bush, watch the videos below.

Below are the treatment methods you can use:

The best time to treat bellyache bush is from December to April. Below is a list of treatment methods that can be used.

There are 5 ways of controlling gamba without the use of chemical.

This is an effective method of control for individual weeds and recent outbreaks that haven't released seeds yet, but it requires a lot of labour.

A brush-cutter, slasher or mower are used to cut weeds off above the ground level.

This will not eradicate bellyache bush however it will kill most plants, reduce the biomass, provide easy access for other treatment options and create opportunities for more desirable species to establish.

Ensure equipment and machinery is cleaned prior to moving to new sites.

Bellyache bush is sensitive to fire, providing there is enough grass or other vegetation to carry a fire.

Young plants tend to be more susceptible than mature plants.

A large portion of the seed bank will usually survive, as many are buried beyond the reach of lethal temperatures.

Removing stock from areas which have been treated for weeds is a common management technique used by land managers.

This can be done in short periods (pasture spelling), or it can be a reduction in stock numbers rather than complete removal.

Supplementary feeding will also reduce grazing pressure on the land and allow the re-establishment of desirable plants which will compete with the undesirable weeds. 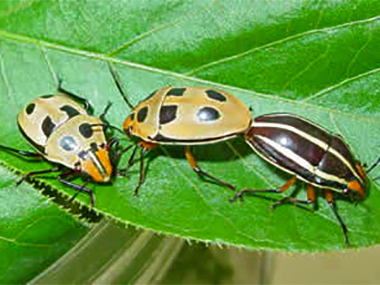 One insect has been released as a biocontrol agent against bellyache bush. The seed sucking bug feeds by inserting its mouthparts into the fruit and injecting a liquid that dissolves the seeds, thus destroying the seeds before they mature. Thousands of Agonosoma have been released in the NT, but have failed to establish. Bellyache bush remains a prime target for biocontrol. 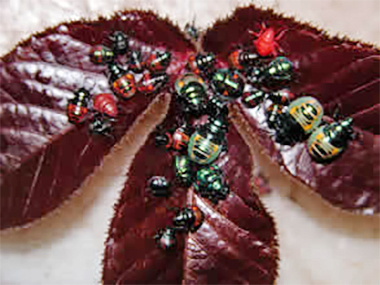 Bellyache bush spreads from stem and root segments including dumped cuttings, slashed plants and plants damaged in events such as flooding.

The pods explode when ripe, spreading seed up to 13m from the parent plant.

Bellyache bush seed can be spread via:

You can prevent the spread of bellyache bush by doing all of the following: