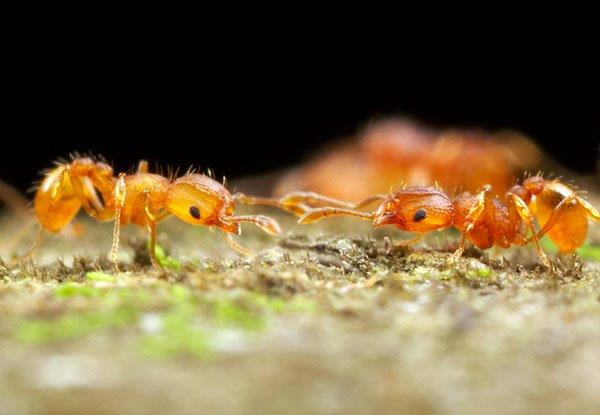 Invertebrates are animals without a backbone.

Exotic invertebrates may have a large impact on the natural environment in the Northern Territory (NT) as they do all of the following:

Exotic invertebrates may also bite or sting people, which can cause death in people with certain allergies. They can spread disease or be a pest in homes.

Bees, ants and wasps are of particular concern in the NT.

These are the most damaging exotic invertebrate species in the NT.

European honey bees compete with native pollinators, such as bees and birds, for nectar and hollows in trees.

This has caused a decline in numbers of native animals in places where the honey bee is living.

European honey bees have also encouraged the spread of weeds, as they often choose the nectar of weeds over native plants.

These bees have a sting that can cause death in people with allergies.

Read more on the big-headed ant.

Read more on the ginger ant.

This ant competes with native ants for food and shelter.

It can also carry human pathogens. It can be dangerous if found in hospitals as it may increase infection rates.

This ant competes with and preys on native invertebrates, which leads to a decrease in local ant diversity.

This species can cause economic damage in towns as it can gnaw through rubber and fabric. It has been known to remove rubber insulation from electric wiring and phone lines, and damage cables.

This ant competes with native pollinators and robs the nectar from native plants. It has a nasty sting that can cause death in people with allergies.

These ants are found in Queensland and are not yet in the NT.

These ants are not in the NT, but are a threat as they prefer tropical conditions.

This species has not yet been recorded in the NT.

This species has a nasty sting. The venom can cause severe reactions in some people, including swelling, nausea, vomiting and breathing problems.

This snail has been eradicated from the NT.

It has been linked to declines in invertebrates and plants, mainly due to competition for food and shelter.

This mosquito is found in the Torres Strait, but has not been recorded in the NT.

This mosquito can spread disease and is suited to tropical climates.

The dengue mosquito, Aedes aegypti, can spread disease and is currently only present in Queensland.

There is a continuous threat of this mosquito entering the NT.