They have not established in Australia but there have been several small infestations detected in the Northern Territory (NT), Western Australia and Queensland.

They are commonly found in South East Asia, including Timor-Leste.

Browsing ants are omnivorous. They are often found on the ground as well as in trees, leaf litter and infrastructure, including electrical boxes.

A distinct behavioural trait is that when undisturbed, they generally move around very slowly. But when disturbed, they run around in a haphazard way.

Current situation in the NT

Browsing ants were identified in the Darwin Port region on 6 August 2015 by Australian Government biosecurity officers.

Since then, 23 infected locations have been detected. Initially, known infestations were limited to Berrimah, East Arm, Frances Bay and Wickham Point.

In September 2020, there was a detection near Kakadu which was a direct trace from the most recent detection in Darwin.

Treatment is underway at this most recent infestation and surveillance is being carried out to confirm that it has not spread into surrounding areas.

To eradicate this latest detection and show proof of freedom, funding for the National Browsing Ant Eradication Program (NBAEP) NT has been extended until November 2023.

As a result of NBAEP NT’s activities, 18 of the locations initially detected have been resolved. The remaining 5 locations are expected to be resolved once post-treatment surveillance is complete.

The Department of Industry, Tourism and Trade (DITT) has carried out extensive surveillance with help from Aboriginal ranger groups at remote sites across the NT, with no further detections. 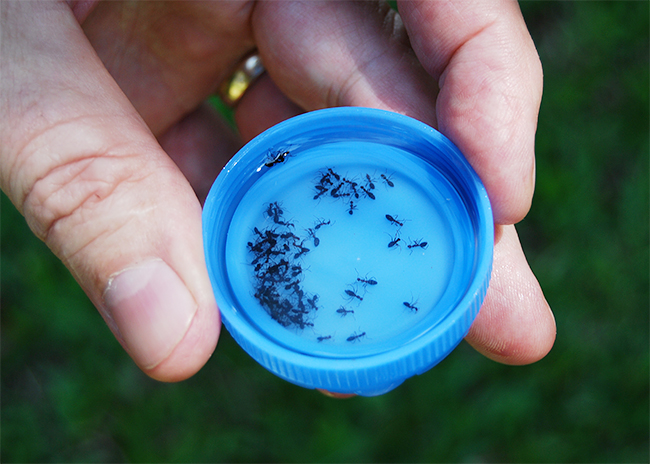 The browsing ant has all of the following features:

Invasive ant species are considered some of the most serious global pests.

They pose a significant environmental and economic threat as they can:

They can also indirectly impact any industry that relies on transporting goods or services. This includes tourism, transport, logistics, construction and mining. This is because invasive ant species can easily spread undetected through shipping containers, vehicles, equipment and other goods.

This means they will outcompete local ants and insects, strip native vegetation and disrupt ecosystems.

Browsing ants also threaten the NT environment, and agriculture and horticulture industry by farming and protecting damaging pests such as aphids, mealybugs and scale insects. These insects reduce plant health and can spread serious disease. They are not harmful to humans or animals.

Browsing ants and other exotic invasive ant species can be transported through various pathways and materials.

They can travel via:

Treatment includes a combination of granulated bait specifically for nuisance ants and a spray treatment where browsing ant activity has been detected.

Biosecurity is everyone’s responsibility. To help protect the NT, you should do the following:

If you think you have seen browsing ants or exotic invasive ant species, call the exotic plant pest hotline on 1800 084 881.

URL copied!
Related information
Back to top
URL: https://nt.gov.au/environment/animals/feral-animals/exotic-ants/browsing-ant 19 May 2022, 12:57 am