This section has information about long-standing rules and traditions you should follow when flying or using an image of the Northern Territory (NT) flag.

You will find information on:

The NT flag was flown for the first time at a ceremony in Darwin on 1 July 1978 marking the grant of self-government.

It includes the three official NT colours - black, white and red ochre (PMS 159) - and a stylised version of the Territory’s floral emblem, the Sturt’s Desert Rose.

The Desert Rose on the red ochre panel has seven petals with a seven-pointed star in the centre, symbolising the six Australian states and the NT.

The five white stars sitting on the black panel on the left of the flag represent the Southern Cross.

The flag was designed by Australian artist Robert Ingpen AM, whose work is well known throughout Australia. 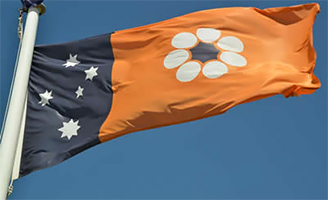