This page has information on the Northern Territory (NT) flag, Coat of Arms and other official emblems.

Official emblems of the Territory are protected under the Flag and Emblem Act 1985. 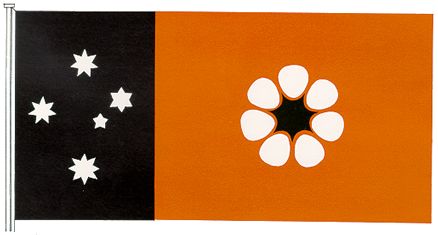 The NT flag was flown for the first time at a ceremony in Darwin on 1 July 1978 marking the grant of self-government.

The flag was designed by Australian artist Robert Ingpen AM, whose work is well known throughout Australia.

Everyone is encouraged to fly the flag proudly as Territorians.

There are long-standing traditions and rules of how a flag should be displayed.

The image of the NT flag is protected under the Flag and Emblem Act 1985.

If you want to use an image of the NT flag for advertising or promotional purposes, you must get the Chief Minister's approval. Read more about the NT Flag. 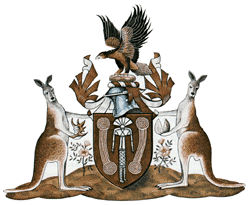 The Coat of Arms is symbolic of the people, history and landscape of the NT.

It has our floral and fauna emblems, the Sturt’s Desert Rose, two red kangaroos and a wedge-tailed eagle.

The kangaroos hold a shield decorated by Aboriginal motifs in one hand and shells found on our coastline in the other.

In the centre of the shield is an x-ray drawing of a woman as seen in rock art in Arnhem Land. The designs on either side symbolise camp sites joined by path markings of Central Australian Aboriginal people.

The eagle holds an Aboriginal Tjurunga stone that rests on a helmet. The helmet is a reminder of the NT's war history. 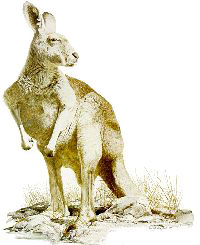 The red kangaroo embodies the NT’s unique wildlife. It is the largest living marsupial with adult males standing more than 2m tall and weighing as much as 75kg.

Males are a rusty brown colour and females a smokey grey, while both have heat-reflecting paler fur on their under surfaces. They also have striking white marks with a black line on the sides of their muzzles.

Their long, thin limbs allow them to travel large distances through harsh conditions. They are found in the NT in very dry areas.

During droughts they retreat to waterways and open grassy areas where food is available. Sometimes several hundred kangaroos can be found in the same place, although they are independent animals and have no social structure. They prefer to rest under shade during the heat of the day.

When the drought breaks they move to mulga tree areas where food and shade is available. This is also where they breed. Females normally carry one young in their pouch. 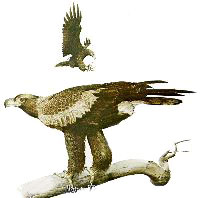 The Wedge-tailed eagle is Australia’s largest bird of prey with an average wingspan of 2.5m. It is dark brown with a chestnut neck.

Their long, wedge-shaped tail and broad wings make it easy to recognise. Their legs are covered in feathers right down to their feet. A hooked beak and strong talons are the hallmarks of a bird that hunts other animals.

Although they are found throughout Australia, in the NT they are more commonly found in the arid centre than on the coastal plains of the north.

Before cattle and sheep farming in Australia, they ate a range of small mammals that lived in the soft ground cover, as well as other birds and reptiles.

Agriculture and fire has destroyed much of the ground cover, so introduced species like rabbits have become a large part of their diet. It is thought the eagle also hunts kangaroos that gather around watering holes.

Eagles form long-lasting pairs who defend their nesting and breeding territory against intruders. They nest in the high trees and build large platform nests that can be reused from year to year.

At sunrise they hunt for food. Later on, as the sun heats up the air close to the ground, strong updrafts allow the eagle to soar and glide up to 2000 m high during the middle of the day, warning other eagles to stay out of their territory. 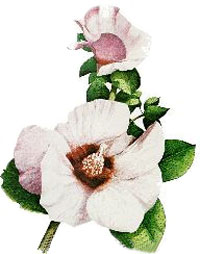 Sturt’s Desert Rose has been the floral emblem of the NT since 1974. It is an arid plant which grows best in stony or rocky ground such as dry creek beds.

The Desert Rose has had many botanical names in the past.

It is a member of the cotton family, rather than the rose family. It was named after Charles Sturt who first collected it during his journey to Central Australia in 1844-45.

The plant is found in the southern parts of the Territory, and is cultivated as a garden shrub in Alice Springs. It can also be found in parts of South Australia, New South Wales and Queensland.

It’s a small bushy plant which usually grows to 1.5 m.

It has dark green, round to oval shaped leaves. The petals of the flowers are mauve with a deep red marking at the base.

The flowers look similar to the hibiscus, which belongs to the same family. The plant’s fruit is capsule-shaped and contains small seeds covered in short hair, which is a trait of the cotton family.

Read about flying the NT flag.