You are encouraged to fly the Northern Territory (NT) flag at your workplace or your home.

How to fly the flag

The NT flag should be used with respect and dignity.

When flying the NT flag you should:

You should not let the flag fall or lie on the ground. The flag should not be used as a cover, unless it is to be used to cover a coffin at a funeral.

How not to fly the flag

You should not fly the NT flag:

Flying the NT flag with other flags

The following rules should be followed:

You should prioritise flags in the following order:

The order of priority can vary on some military occasions or establishments.

The Australian national flag can be followed in the order of priority by defence ensigns and military pennants ahead of other flags, ensigns and pennants.

Flying the flag at half-mast

Flags are flown at half-mast as a sign of mourning.

The half-mast position will depend on the size of the flag and flag pole.

When lowering a flag from the half-mast position it should be briefly raised to the top and lowered ceremoniously.

The flag should never be flown at half-mast at night even if illuminated.

When flying the national flag with other flags, all flags should be flown at half-mast. The Australian flag should be raised first and lowered last.

The Northern Territory Government will give advice when flags are to be flown at half-mast.

Protocol NT will contact NT flag marshals by email about these occasions.

You can register to be an NT flag marshal by emailing protocol.dcm@nt.gov.au.

How to dispose of the flag

You should dispose of a damaged flag in a private and dignified way.

Examples of how to fly flags 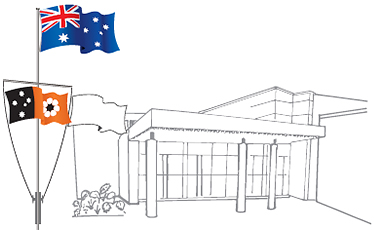 When the flag is displayed vertically against a wall or door the flag may appear to be in reverse. This is the correct way to hang the flag in this instance.