The peewee or magpie lark (Grallina cyanoleuca), is one of the Northern Territory's native and protected species. It is widespread across Australia. It is small bird, 26-30cm, with a mellow, liquid, yet clear voice.

The male is identified by a white tail with a wide black band and a horizontal black line through the eye.

The female has a white brow and throat and a black band vertical through eye. 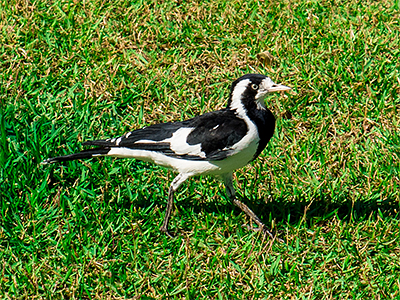 Peewees are common throughout Australia, except Tasmania, and are often found in urban areas. The Peewee's habitat is diverse, ranging from coastal to semi-desert. They prefer anywhere with trees and water, but also open areas of bare soft ground for foraging.

Peewees are mostly ground dwelling and forage for a variety of insects and freshwater invertebrates.

Both parents share the incubation duties and care for three to five young. In good years, Peewees may rear more than one brood. The breeding season is August to January, but may happen at other times of the year.

Male and female birds gather wet mud to construct a bowl shaped nest on a horizontal branch sometimes 20 metres off the ground which they line with feathers and grasses.

The male and female birds often sit side by side whilst on the nest and call alternately, each raising and lowering their wings as they do so, forming a duet.

Many Peewees in urban areas are used to human beings and therefore the presence of Peewees in an area does not necessarily mean they will be a nuisance.

Peewees may sometimes attack reflections in windows believing it is another bird threatening their territory. This happens mainly during the breeding season and can be managed by:

Peewees are a protected species in the Northern Territory and cannot be interfered with without a permit from Parks and Wildlife NT.

Peewees swoop to protect their nests and young or if they feel threatened. Most swooping happens during the nesting period of August to January.

However if they do swoop it can be an unpleasant and even dangerous situation, so if you cant avoid the area altogether, here are some easy steps to reduce the risk from Peewee swooping:

Peewees may defend an area of up to 100 metres from their nest. Swooping will generally stop once chicks have left the nest.

The Peewee nesting period is between August – January, however they have been known to nest outside of this time frame.