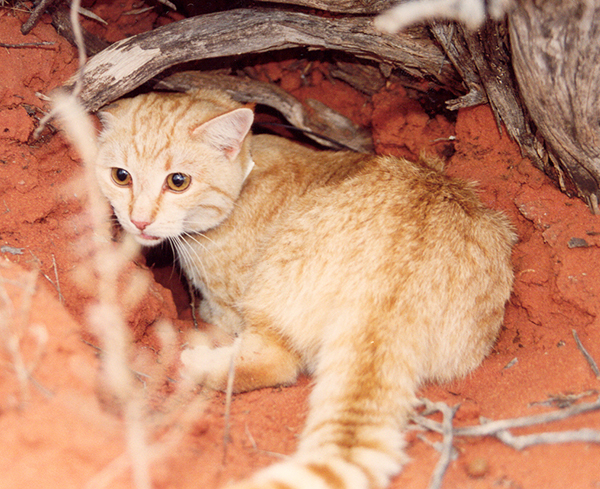 Feral cats have been in the Northern Territory (NT) for over 100 years and have adapted to all habitats, from rainforests to the desert.

Feral cats are a serious threat to conservation of biodiversity in the NT.

They can impact native animals in all of the following ways:

Feral cats have played a role in the loss and extinction of native animals, particularly in Central Australia.

Overall 63 species of native vertebrate have been found in the stomachs of feral cats, including mammals, reptiles, birds and amphibians.

There is a lack of evidence on the effects of competition between feral cats and native species.

It is assumed that species similar to cats, such as the western and northern quolls, now have to compete for food, habitat, shelter and other resources.

Competition can also occur between cats and predatory birds.

Cats may reduce prey for raptors such as the brown goshawk and the peregrine falcon.

There is also a possibility of competition with larger reptiles such as elapid snakes and goannas that prey on a range of vertebrates similar to those taken by feral cats.

Cats can spread disease to native animals and humans.

Toxoplasmosis has been recorded in several dasyurids species - carnivorous marsupials such as quolls - although its impact on population numbers is unknown.

It is difficult to control feral cats in the NT.

The only successful methods have been trapping or baiting. Bait can only be used when there is a lack of food as cats will not scavenge unless forced to.

Baits can also impact other species, including dingoes, which are protected in the NT.