Mango shoot looper (MSL) has been detected in the Darwin rural area. It is an exotic moth species.

Mango shoot looper (MSL) is an invasive pest of mango and lychee (also known as litchi).

It has been detected in the Darwin rural area of the Northern Territory, with the first case confirmed in early April 2022.

MSL is a threat to commercial mango production, as well as backyard trees.

Other fruit trees with a similar growing habit such as rambutan, longan and cashew may also be potential hosts.

Where it is found

It is found in several parts of Asia including:

MSL was recently found in Far North Queensland in 2021.

It was detected in Mareeba, Mutchilba, Biboohra, Dimbulah, Atherton Tablelands and Cardwell.

Further detections and distribution outside of these areas are likely as the pest spreads.

Larvae vary in colour from yellow, brown to black, with a mottled “tiger” patterned appearance. When mature, they can be up to 22mm in length. 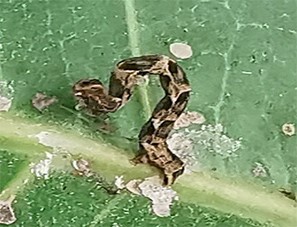 The pupae have a distinctive elongated triangular appearance. They are first green and then turn brown as they mature. They are up to 9mm in length. 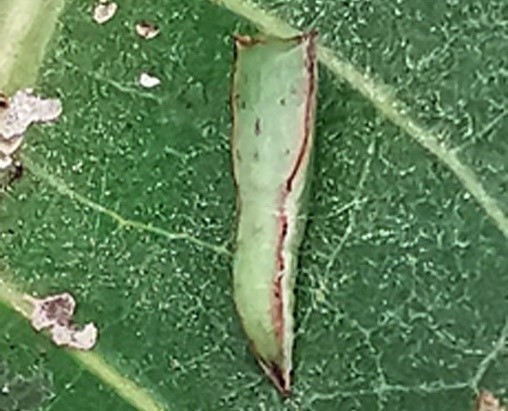 Adults have 3 rows of brown patterns on the wings, with the last 2 having dark brown spots scattered along the length. Their wingspan is 20mm across.

Female moths are pinkish in colour and the males are very pale brown or pinkish fawn. 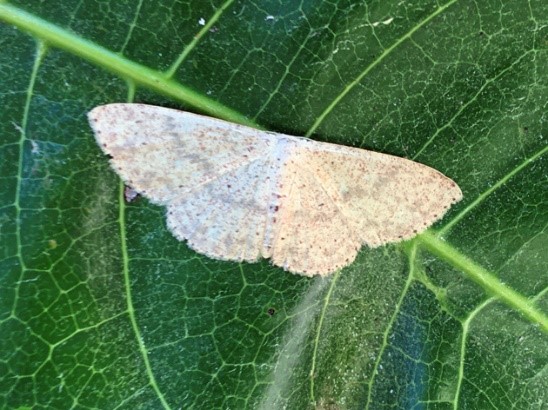 The insect completes its full life cycle in 15 to 19 days, and the larval period is typically 8 or 9 days.

Larvae feed on the top layer of the leaves, giving them a skeleton-like appearance. They also feed on young shoots, flower panicles and immature fruit. Large populations can leave the panicles bare of any flowers or small fruit within a week. 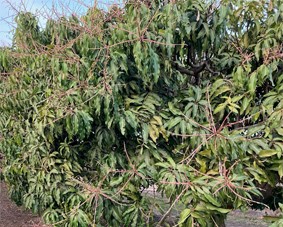 The insect is a threat to commercial mango production in the NT. However, due to having only been found recently in Australia, its broader impact is currently unknown.

Severe infestations can cause 80 to 100% leaf and flower damage. It is most likely to be a problem during the flowering season. 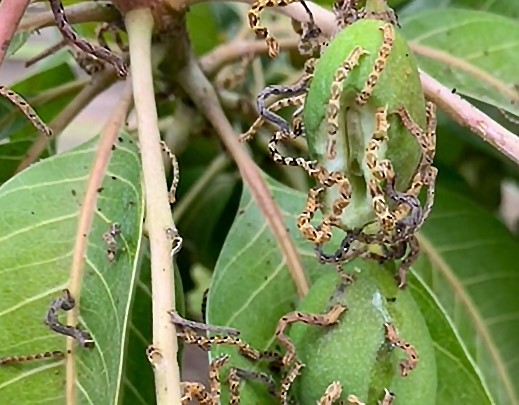 Adults can fly and spread naturally in localised areas from tree to tree. Their spread may be enhanced by strong winds.

Larvae move in a “looping” fashion and can move to undamaged areas of the tree by suspending themselves on silken threads and dropping between branches.

MSLs may also be spread by human-assisted movement of infested plant material. You should have biosecurity measures in place at your property to reduce and prevent biosecurity risks.

Road traffic may inadvertently move adult MSLs as they are attracted to lights of vehicles and caravans.

To protect your property from MSL, you must have strict biosecurity measures in place.

If you have mango and lychee trees, you should inspect them for MSL.

For advice around chemicals for use and strategies for control, contact the plant biosecurity team.

If you think you have seen MSL in the NT, contact:

You can submit a specimen for identification at the DITT Entomology at:

You can also email images and photos of suspect larvae to insectinfo@nt.gov.au.

You can also go to the Australian Mango Industry Association website for advice on managing MSL.

URL copied!
Back to top
URL: https://nt.gov.au/industry/agriculture/food-crops-plants-and-quarantine/mango-shoot-looper 24 May 2022, 5:58 am